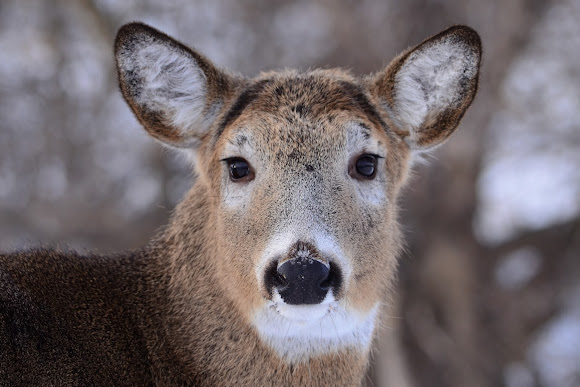 Daddy is one of the original deer that befriended or accepted my presence in the herd. I met him four years ago so he's at least five years old at this time. Daddy and OH or One-Horn were the first two bucks I noticed to shed their antlers this winter and that was the first week of January. Last year antlers weren't shed until late February or early March by most of the bucks but it was a warmer than usual winter up here. I've also called Daddy the Gentle Giant on numerous occasions as he's the one buck I trust completely with or without antlers. Even with young fawns he's never shown any aggression other than an occasional soft snort. In the fourth image you see Tiny G. has provoked a challenge or fight and Daddy is rearing up in response, without actually landing a blow to Tiny G. He will and does defend himself but has never initiated or started a fight that I've ever witnessed in the four years I've been observing and photographing them.

SachindraUmesh-Thank you for being so generous!! I was struggling with a new camera and its built-in editing software. I wish I could have done them better justice. All your images are gorgeous!! I swear I could look at them all day. :-)

EmilyMarino-Thank you!! New (refurbished) camera with new in-camera editing software...sorry for the poor images. I was still trying to get a better handle on their use. Getting closer but its taking far longer than my old Nikon D40X where all I had to do was convert from RAW to JPEG and upload...Argh! "-)

Gerardo Aizpuru-Thank you so much! :-)