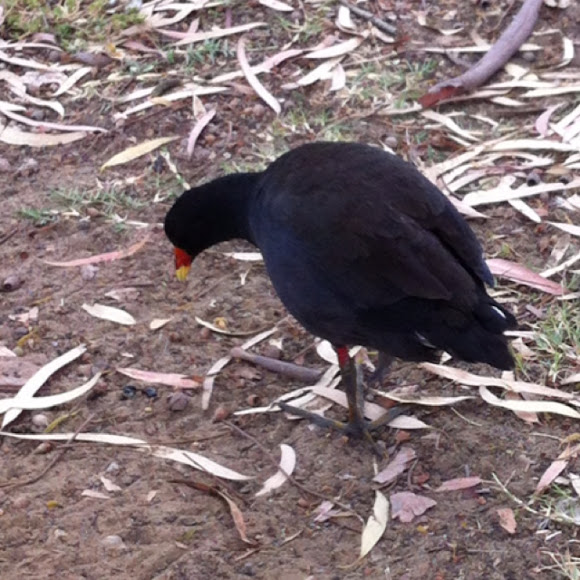 The Dusky Moorhen is a medium-sized (up to 40 cm), dark grey-black water bird with a white undertail. It has a red bill with a yellow tip and a red facial shield extending between its eyes. The legs are orange-yellow. The sexes are similar in appearance. Young birds are duller and browner than adults, with a greenish bill and face shield.

Observed at the Old Port Reach Reserve (Grange, Adelaide, South Australia) not far from Charles Sturt's Cottage. This is generally a slow moving water way with patches of reeds here and there, very close to Grange Primary School and busy Jetty St situated in suburban Adelaide. Habitat: The Dusky Moorhen is found in wetlands, including swamps, lakes, rivers, and artificial waterways. It prefers open water and water margins with reeds, rushes and waterlilies, but may be found on grasses close to water such as parks, pastures and lawns. Distribution: The Dusky Moorhen is widespread in eastern and south-western Australia, ranging from Cooktown to eastern South Australia and in the southern corner of Western Australia. It also occurs in New Guinea, and Indonesia. It is uncommon in Tasmania.

Breeding: During breeding season (August to March), the Dusky Moorhen forms breeding groups of up to seven birds. It builds a bulky nest of aquatic plants among rushes or other vegetation at the water's edge, and lays 6-10 whitish eggs. Two or more females will lay their eggs in the same nest and all members of the group help to incubate the eggs and feed the young. Diet: The Dusky Moorhen feeds in the water and on land on algae, water plants and grasses, as well as seeds, fruits, molluscs and other invertebrates. It will also eat carrion (dead animals) and the droppings of other birds. It does not dive when feeding; its tail is always visible above the water when upended. Call: A rapidly repeated, "kok, kok, kok" and sharp, strident "kirks". All species information came from: http://www.parks.tas.gov.au/index.aspx?b... Photo three also contains a young one.