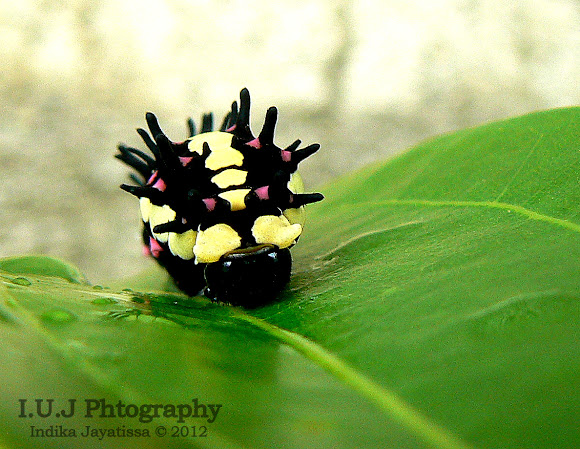 The larvae and pupa are stated by Mackinnon to resemble closely the larva and pupa of P. agestor'. Messrs. Davidson and Aitken's description of them is as follows: "Not unlike the larva of the Ornithoptera group in form, having similar rows of fleshy processes, but it is by far the handsomest Papilio larva we know, being of a dark umber-brown colour with a bright red spot at the base of each process, a dorsal row of large irregular yellow patches and a partial lateral row ending in a diagonal band which connects the two. Velvet black or dark green. Has carmine spots. Has a dark red-brown longitudinal band and red spots. Two rows of sharp spines on segments 1 to 4 and single row on the others. The Osmeterium is light indigo-blue.

This is a butterfly of hilly regions but also found at lower elevations. It is plentiful in the premonsoon and monsoon period and becomes scarce later on.

I love the pink.