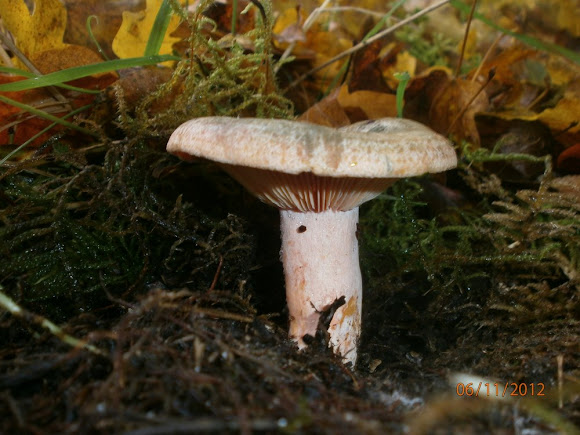 Milk was bright orange and flesh immediately discoloured bright orange (5th photo). Later on the flesh and areas around where the gills had been broken discoloured vinaceus red/purple. It may have been bitter but I don't remember fully. Here's a good link for American fungi in Lactarius deliciosus group... there's more vsrieties than I thought! http://www.mushroomexpert.com/lactarius_... Lactarius quieticolor looks similar to me and if this mushroom were bitter it would fit with the decsription of L. quieticolor which can be mild or bitter. L. deterrimus is also described as being bitter and more common than L. quieticolor. According to wildaboutbritain, L. quieticolor is on the Red Data List: http://www.wildaboutbritain.co.uk/lactar... The Red Data List for fungi in the UK can be downloaded here: http://www.britmycolsoc.org.uk/mycology/...