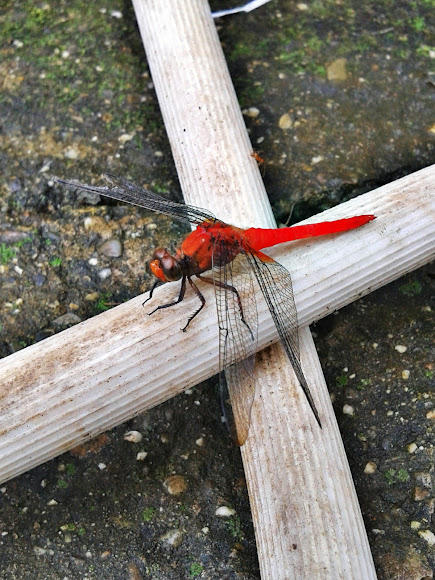 This one is resting on a garden hose at noon...it's vibrant red colour drew my interest to click the camera right there and then..

listed in the Least Concern category in th IUCN Red List, Sympetrum fonscolombii is a widespread and common species found throughout Africa, southern Europe and eastwards to the Middle East, the Indian Subcontinent and the Indian Ocean Islands. The species becomes scarcer towards the north but has expanded its range considerably in the last two decades and is now common in most of Central Europe. The species shows a strong tendency to migrate and has been found northwards as for as Scotland, the Swedish island of Öland and Latvia. It is likely that climate change will facilitate a further northwards expansion in the next years.

Thanks Ronald Lo, checked on your suggestion and yes it seem to be a red-veined darter..thanks again :)