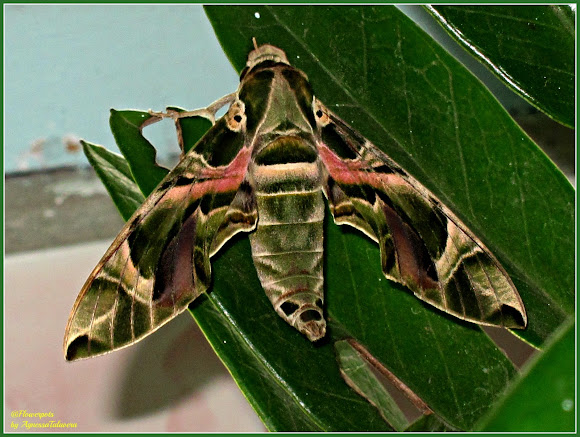 I spotted this male Oleander Hawkmoth at around 1:30am Jan 1 2013, after the merrymaking of the new year has subsided. I saw it in the garage near the bird cage where the female species (the one I just released the other day) was born. That's why I thought "my baby" has returned. But noticing the green spots at the end of abdomen, I had my doubts. After further research, I confirmed that the new arrival was a male, could be following the pheromones released by the female while she was not yet released. This male hawkmoth stayed the whole day just clinging to a leaf of the Welcome Plant. I saw it last 1:30am Jan 2. When I checked on it at 6:30am Jan 2, it was already gone. I really hope he and "my baby" have already found each other, and they be able to complete their life cycle.