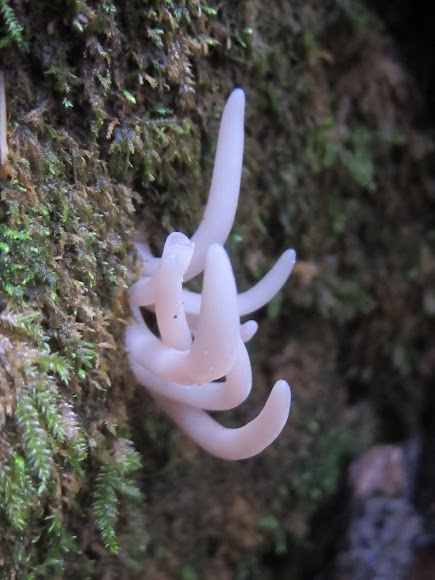 Clavaria fragilis, commonly known as fairy fingers, white worm coral, or white spindles, is a species of fungus in the family Clavariaceae. It is synonymous with Clavaria vermicularis. The fungus is the type species of the genus Clavaria and is a typical member of the clavarioid or club fungi. It produces tubular, unbranched, white basidiocarps (fruit bodies) that typically grow in clusters. The fruit bodies can reach dimensions of 15 cm (5.9 in) tall by 0.5 cm (0.2 in) thick. Clavaria fragilis is a saprobic species, growing in woodland litter or in old, unimproved grassland. It is widespread throughout temperate regions in the Northern Hemisphere, but has also been reported from Australia and South Africa. The fungus is edible, but insubstantial and flavorless. There are several other small white coral-like fungi with which C. fragilis may be confused. Wikipedia

Those Fairy Fingers are doing something nauuughty! ;)