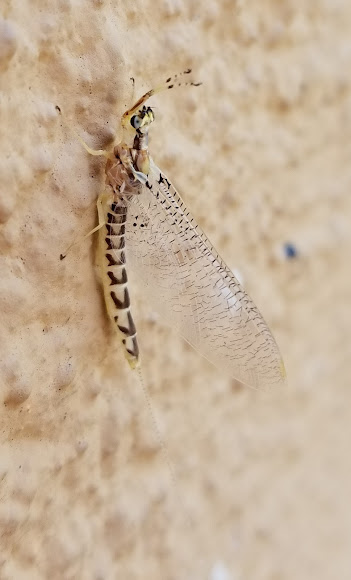 The mature adult stage of Hexagenia limbata can be as much as 27 mm (1.1 in) long. The females tend to be slightly larger than the males but have smaller eyes. The forewings are long and membranous while the hind wings are much smaller and have dark margins. The tip of the abdomen bears two long cerci or tails. When the insect is at rest, the wings are folded vertically above the back. The color and body markings are somewhat variable but this insect is usually some shade of yellow, pale brown or white.

Hexagenia limbata is the most widely distributed mayfly in North America. It is known from most of Canada and all the states in the United States except Alaska and Arizona. It is at its most common in the Great Lakes region. Its habitat is lakes and slow-moving rivers with muddy bottoms in which the nymphs can burrow. Adults can be found congregating in swarms near the water or resting in vegetation.