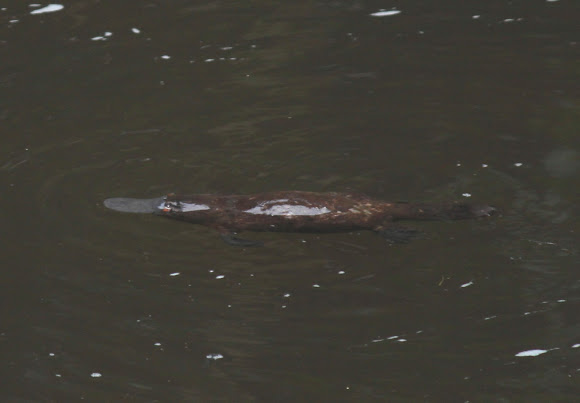 The platypus (Ornithorhynchus anatinus) is a semiaquatic mammal endemic to eastern Australia, including Tasmania. Together with the four species of echidna, it is one of the five extant species of monotremes, the only mammals that lay eggs instead of giving birth. It is the sole living representative of its family (Ornithorhynchidae) and genus (Ornithorhynchus), though a number of related species have been found in the fossil record. The unusual appearance of this egg-laying, venomous, duck-billed, beaver-tailed, otter-footed mammal baffled European naturalists when they first encountered it, with some considering it an elaborate fraud. It is one of the few venomous mammals, the male platypus having a spur on the hind foot that delivers a venom capable of causing severe pain to humans. The unique features of the platypus make it an important subject in the study of evolutionary biology and a recognisable and iconic symbol of Australia; it has appeared as a mascot at national events and is featured on the reverse of its 20-cent coin. The platypus is the animal emblem of the state of New South Wales. While both male and female platypuses are born with ankle spurs, only the male's spurs produce a cocktail of venom, composed largely of defensin-like proteins (DLPs), three of which are unique to the platypus. The DLPs are produced by the immune system of the platypus. Although powerful enough to kill smaller animals such as dogs, the venom is not lethal to humans, but the pain is so excruciating, the victim may be incapacitated. Oedema rapidly develops around the wound and gradually spreads throughout the affected limb. Monotremes (for the other species, see Echidna) are the only mammals (apart from at least one species of dolphin) known to have a sense of electroreception: they locate their prey in part by detecting electric fields generated by muscular contractions. The platypus' electroreception is the most sensitive of any monotreme.

The platypus is found in eastern Australia. They live aside freshwater rivers or lakes, and create burrows for shelter and protection. They are active mainly at nighttime hours, and use their webbed feet for swimming. When swimming the platypus has its eyes shut. They swim underwater for 2 minutes, before returning to the surface for oxygen. They can however stay underwater for up to 10 minutes, and due to their natural buoyancy, they need to be underneath another object to do this. This platypus was spotted at Broken River, a well known spot to see them. I must have taken 60 photos, these are the best ones believe it or not!