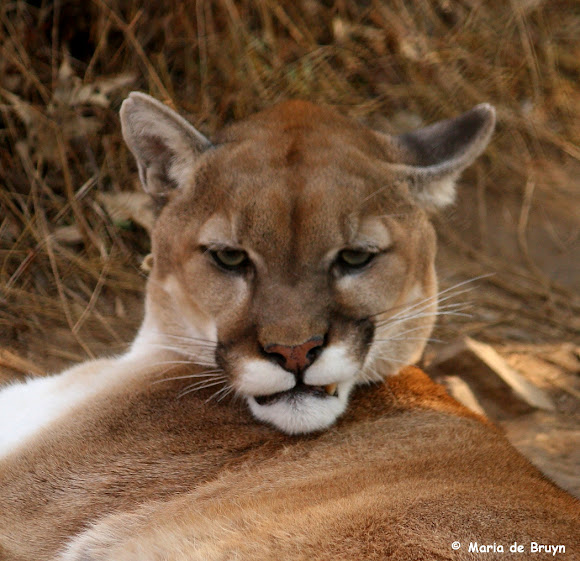 The cougar’s head is round with erect ears; its hind legs are the largest in proportion to its body of any cat. The cougar’s most recognizable feature is its long, heavy tail, which is almost two-thirds the length of its body. Cougars’ coats are generally tawny in color but may vary from silvery-grey to reddish, with lighter patches on the belly, jaws, chin and throat. Attacks on humans remain fairly rare, occurring when a particular cats habituates to humans, is starving or threatened. Estimates of human deaths in Canada and the US due to such attacks range from 14-20 over the last 125 years or so.

Nakobi cougar came to Carolina Tiger Rescue when a big cat sanctuary in Ohio was having financial difficulties and had to close. He came to the Ohio sanctuary after a man dropped him off on their doorstep and never returned. He is always happy to see visitors and “talks” a lot.

He purrs very loudly and has a sound that is a bit like a warble, too! :)

Fabulous! I love cougars - they are the only big cats I've heard meow like a domestic cat!

Thanks, Seema and Scott. I especially liked his expression in the first shot!

Thanks, sarahaw1981. I saw him again briefly today and he is a really beautiful cat and very vocal! I'm glad that he could be rescued and can live out his life in safety.