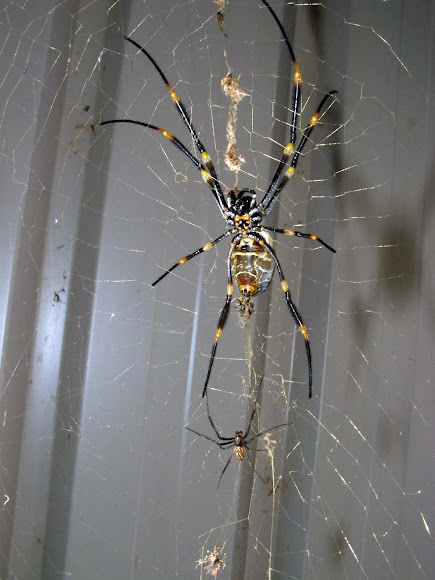 Very large spider with slender striped legs and possibly a plump body although not always. The web can be a huge huge orb covering several square metres with structural elements several metres long. It contains noticeable yellow silk thread and usually has a plume of web wrapped detritus near the central span if it has been in place for any timeThe spider is usually found in the middle and usually female as the males are tiny

Requires large undisturbed areas for web building. Is found among the coastal dunes among the low Westringia shrubs where people rarely go in this area

Male and female. The male is smaller and they are beginning the mating ritual. Note the yellow silk and the detritus plume beneath them. It seems from the date here that they mate during the middle of summer Their web took up a huge section of the back yard and as we have a policy of not disturbibg them it was there for the whole summer and reappeared the next