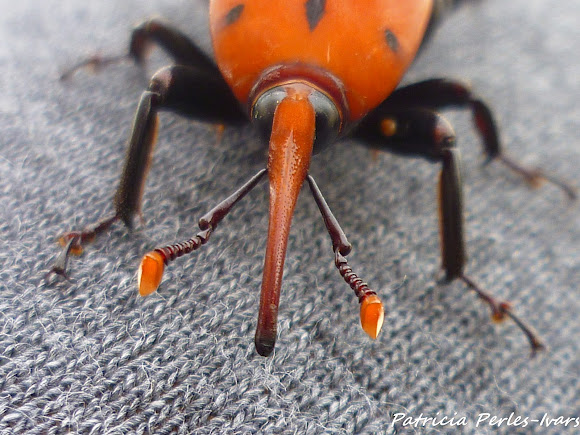 is a species of snout beetle also known as the Asian palm weevil or sago palm weevil. The adult beetles are relatively large, ranging between two and five centimeters long, and are usually a rusty red colour - but many colour variants exist and have often been misidentified as different species. Weevil larvae can excavate holes in the trunk of a palm trees up to a metre long, thereby weakening and eventually killing the host plant. As a result, the weevil is considered a major pest in palm plantations, including the coconut palm, date palm and oil palm. Originally from tropical Asia, the red palm weevil has spread to Africa and Europe, reaching the Mediterranean in the 1980s. It was first recorded in Spain in 1994, and in France in 2006.

The red palm weevil is reported to attack 17 palm species worldwide. Although the weevil was first reported on coconut in Southeast Asia, it has gained a foothold on date palm over the last two decades in several Middle Eastern countries, and then expanded its range to Africa and Europe. This expansion has been due to the movement of infested planting material. In the Mediterranean region, the red palm weevil also severely damages Phoenix canariensis. Currently, the pest is reported in almost 15% of the global coconut-growing countries and in nearly 50% of the date palm-growing countries. The list of known hosts includes: Areca catechu, Arenga pinnata, Borassus flabellifer, Caryota maxima, C. cumingii, Cocos nucifera (coconut palm), Corypha gebanga, C. elata, Elaeis guineensis, Livistona decipiens, Metroxylon sagu, Oreodoxa regia, Phoenix canariensis, P. dactylifera (date palm), P. sylvestris, Sabal umbraculifera, Trachycarpus fortunei, Washingtonia spp.Lab studies have reared the insect on diets of Agave americana and Saccharum officinarum, but these findings have not been observed in the wild. There is evidence that the weevil prefers the 'Sukkary' cultivar of date palm to other cultivars. The palm species Washingtonia filifera and Chamaerops humilis may be resistant to the red palm weevil.

The infestation of the pest can result in yellowing and wilting of palms, that may lead to the death of the affected plant. The crown wilts first, and lower leaves will follow, due to damage to vascular tissue. Major symptoms such as crown loss or leaf wilt are usually only visible long after the palm has become infested. Secondary infections of opportunistic bacteria and fungi may occur within damaged tissues, accelerating decline. By the time these external symptoms are observed, the damage is usually sufficient to kill the tree, and the infestation may have been present for six months or longer. In high-density infestations, sounds of the larvae burrowing and chewing can be heard by placing one's ear to the trunk of the palm. Recent research has been conducted using electronic listening devices or dogs trained to recognize the scent of weevils or palm decay to detect infestations at low densities earlier in the process.

Thank you Gerardo and Malcolm!

Thank you YukoChartraw!
I love the antennas too!
:)

Amazing shots! Love all the details, especially of the antennas.