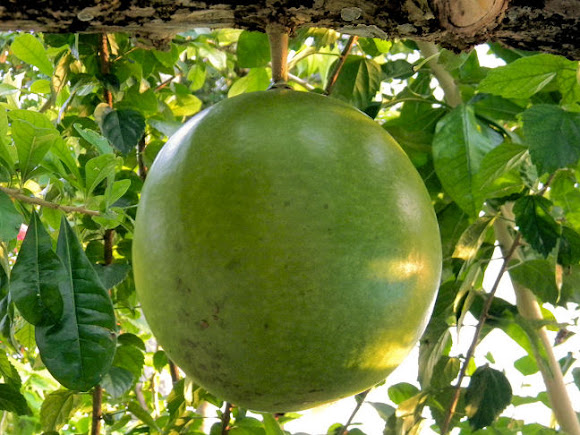 This flowering/fruiting tree species species is exotic to Biak (New Guinea).Crescentia cujete has been cultivated widely throughout the New World tropics since prehistoric times; its exact native range is uncertain. It is a small tree with light green bell-shaped flowers that are borne singly on stout stalks on the trunk and branches. This species is now widely grown throughout the tropics of both the Old World and New World for its fruits, which are used to make bowls, cups, jugs, water containers, and other utensils, as well as (often decorated) ornaments and musical instruments. It is also grown as an ornamental.

Growing as an ornamental in the gardens of a hotel.

A local man told me that it was brought there (Biak Island) by the Dutch. Sounds plausible.

Very interesting to find this specie so far from Latinamerica