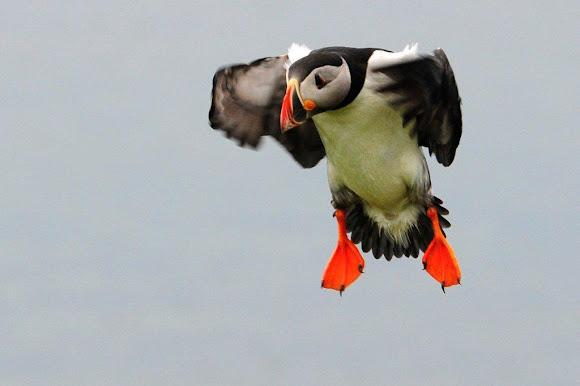 Occurs in and around the north Atlantic. Disperse in winter over open ocean, reaching as far south as the Azores and Canary Islands. During summer, frequents rocky cliffs of the north Atlantic and northern Europe.

Congrats Marie-France, this comical little guy is the star of our Facebook caption contest! https://www.facebook.com/photo.php?fbid=...

I read about this in 4 grade!

Fantastic capture of him coming in for a landing.

Put a smile on my face! Great photo!

Thanks a lot every body for your nice comments.....

As much as I have seen this bird... I have never seen a shot like this.. Lovely!! Thanks for sharing.

Wow! What a shot!

Great picture! How do people get pictures of flying birds? I can never manage it.

Very interesting photo. Thanks for sharing.

and 113 other people favorited this spotting