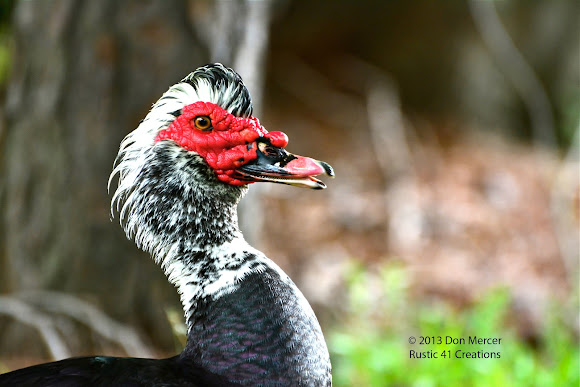 This specimen is a large male, or drake, that appears to be fully developed. While mostly seen in the water, this duck occasionally walks in the shallows. It is seen, even less frequently, departing the water altogether to forage for food on land, as is the case here.

Muscovies may be seen throughout the Americas: Canada; United States; Mexico; and through Central and South America.

I captured these images while kayaking on Lake Trant in Virginia Beach, VA. This specimen was seen on the bank a short distance from my home. This is the only muscovy duck that I have ever seen out of the water. As an aside, I refer to the muscovy as a "water turkey" due to the resemblance around its head to our favorite Thanksgiving bird.