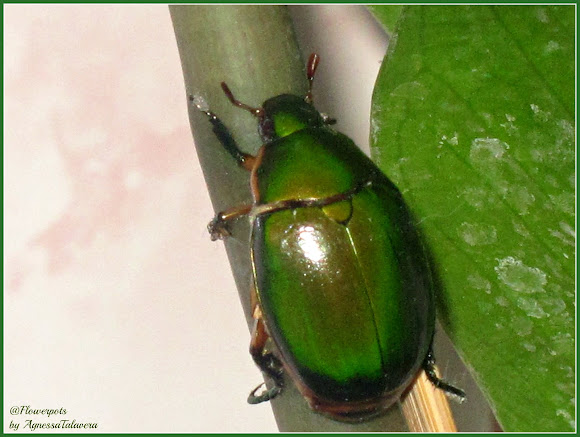 Scarab beetle about 2cm in length, with shiny green elytra and metallic-coloured legs. The genus Anomala (Samouelle, 1819) of the Scarabaeidae family, consists of many species of similar beetles. A common characteristic behavior is that most grubs of these species feed on the roots of grasses, becoming a pest in many areas where they invade. Most notable is the Oriental beetle Anomala orientalis (Waterhouse), which is most likely a native pest of the Philippine Islands, and was introduced to the Hawaiian Island Oahu sometime before 1908 (Tashiro 1987). Once it was introduced to North America, it has since become a major pest in several mid-Atlantic states.

Thanks Adi and Satyen!

Thanks Jill, Nuwan, Yuriana, catchthesound for the appreciation. :)