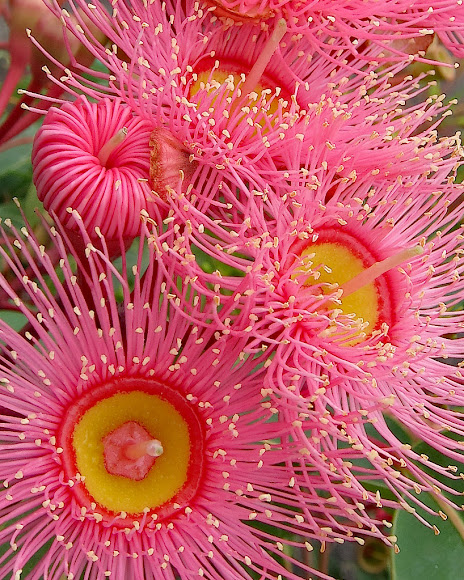 These trees were spotted in the Cumberland State Forest.

According to my brother (a horticulturalist), pink and red flowered eucalypts are not common in the eastern states - most eucalypts bloom either cream or yellow. Hybrids like this fill the gap and are keenly sought after by local councils and town planners for street tree planting. They are hardy trees and the flowers are excellent for attracting birds. Corymbia species are also drought tolerant which, in Australia these days, is of great importance. On a totally different note, an Australian author, May Gibbs, wrote a series of children's books called Snugglepot and Cuddlepie, the first book in the series published in 1918. Snugglepot and Cuddlepie, the gumnut babies, are the protagonists of the story and are modelled on the appearance of young Eucalyptus (gum tree) nuts. The villains are the Banksia Men which are modelled on the appearance of aged Banksia 'cones', with follicles for eyes and other facial features. http://en.wikipedia.org/wiki/Snugglepot_...

Thanks, Pam. These were absolute beauties. I hadn't seen this variety before. Very impressive, and the bees love them.

Thank you. This tree, although very young, had the most wonderful 'vibe' about it, and was refreshing just to be around. Perhaps I was just happy or too much coffee. Regardless, I plan on planting one in my garden sometime soon.

I'm so happy to hear that, Leanne. Thank you. They are quite stunning. There's a red variety too, although I didn't see them.

I cant tell you how much I love these flowers Neil. You've made my day. Thanks for sharing :)