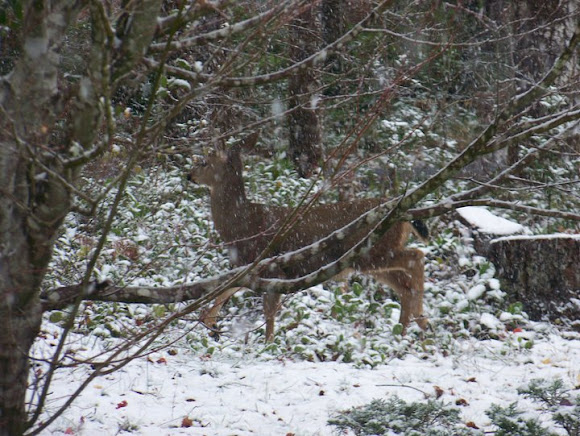 Old-growth forests are important for coastal blacktails, as the habitat provides shelter and forage, and also stops buildups of deep, heavy snow. .They often visit our yard (and garden; which is a BAD thing for our garden! The fence doesn't always keep them out.) They like to munch on our crab apple trees, they try to get our blueberries, and if we have any roses growing, they'll munch those too.

"Two forms of black-tailed deer or blacktail deer that occupy coastal temperate rainforests on North America's Pacific coast are subspecies of the mule deer (Odocoileus hemionus). They have sometimes been treated as a species, but virtually all recent authorities maintain they are subspecies.[1][2][3][4][5][6][7] The Columbian black-tailed deer (Odocoileus hemionus columbianus) is found in western North America, from Northern California into the Pacific Northwest and coastal British Columbia.[8] The Sitka deer (Odocoileus hemionus sitkensis) is found coastally in British Columbia, Southeast Alaska and Southcentral Alaska (as far as Kodiak)."

Thanks, I only wish the photo was a bit clearer ... but she does blend in with her surroundings really well!