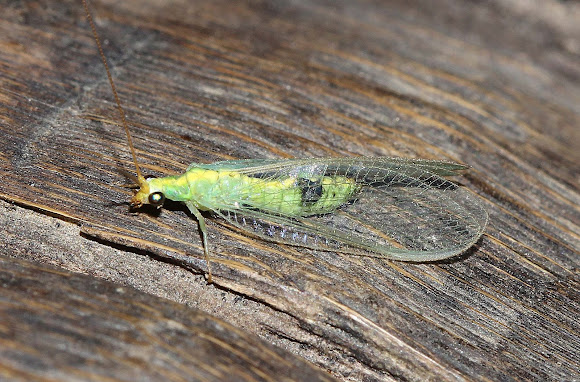 Neuroptera; Chrysopidae; Chrysopinae; Semachrysa sp. "Green lacewings are insects in the large family Chrysopidae of the order Neuroptera. There are about 85 genera and (differing between sources) 1,300–2,000 species in this widespread group." Wikipedia.

This Green Lacewing was spotted on an old wooden bench in the forecourt of the rice mill.

When I spotted this Green Lacewing, I almost decided not to take any photos of it because it looked rather weak (I thought it might be dying) and it had what I thought was a hideous black mark on each side. I didn't know if the marks were caused by injuries or disease, but it struck me that they were rather strange. So I took two or three photos and only one was useable. Several months later, I came across a scientific paper: https://zookeys.pensoft.net/articles.php.... It concerned a new species called Semachrysa jade sp. n. and guess what, it has the same ugly marks on the wings on both sides. The slight difference is that the marks on my specimen are about halfway along the wings and the new species has its marks about one third of the way along. So I felt reasonably secure in assuming that my lacewing was in the same genus. Everything else on both species looks identical as far as I can tell.