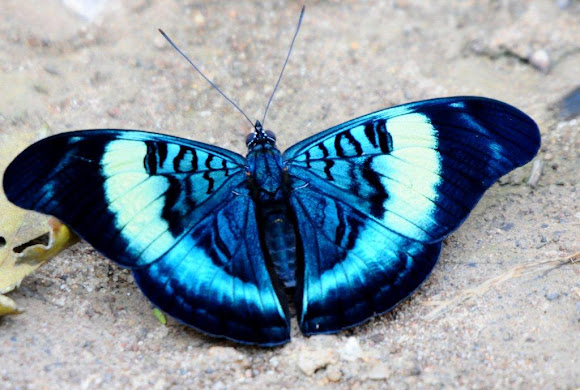 The Prola Beauty or Red Flasher (Panacea prola) is a species of butterfly of the Nymphalidae family. The wingspan is 65–75 mm. The underside of the hindwings is bright red without markings. The genus Panacea contains 3 known species (prola,procilla,regina), all confined to the neotropics. The underside hindwings of all Panacea species are reddish. In prola the underside is bright red and without ocelli. The iridescent bands on the upperside of all Panacea species are a highly reflective pale turquoise colour when viewed from directly above in bright sunlight. In overcast conditions, when viewed at certain angles, the colour changes to a beautiful shade of sky blue.

This species appears to be confined to rainforest and transitional cloudforest, at altitudes below about 1000m. It becomes increasingly abundant at lower altitudes, and can be extremely common below 500m in certain areas, e.g. in the forests of the Manu in southern Peru. Panacea prola is found throughout much of South America, from Colombia to southern Brazil but is more abundant in the foothills of the eastern Peruvian Andes than anywhere else.