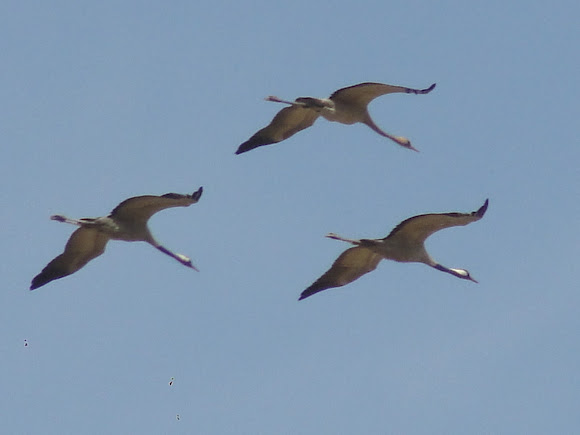 The Common Crane (Grus grus), also known as the Eurasian Crane, is a bird of the family Gruidae, the cranes. A medium-sized species, it is the only crane commonly found in Europe besides the Demoiselle Crane. It is also one of only four crane species (with the Sandhill and Demoiselle Cranes and the Brolga) not currently classified as threatened with extinction or conservation dependent at the species level.

In Ireland, despite being extinct for over 200 years, the Common Crane plays a very important part in Irish culture and folklore and so thus recent efforts to encourage it back to Ireland are received with much enthusiasm. The Kranich Museum in Hessenburg, Mecklenburg-Vorpommern, Germany, is dedicated to art and folklore related to the Common Crane.

Thanks Atul for confirming,,
show them in sky near Thol bird sanctuary

Sachin these look like Common cranes to me :)
recently saw them at Nalsarovar :)