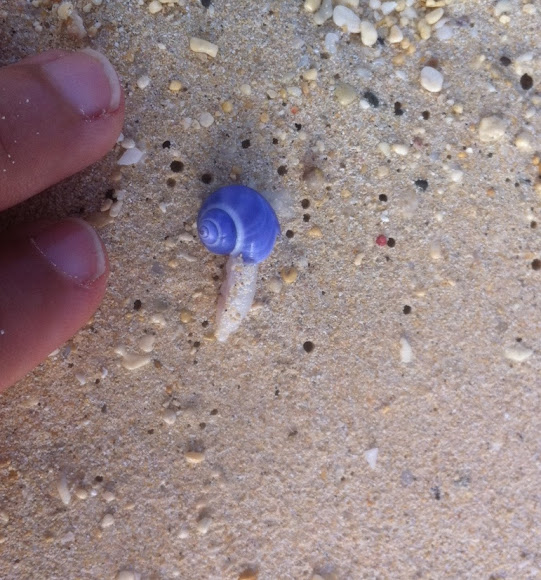 Violet Sea Snail Phylum Mollusca The Violet Snail is a brilliant purple color and is sometimes found washed ashore. The head of the violet snail has a long cylindrical snout . They have no eyes. The flesh of this species is deep violet or black and in adults the operculum is absent.

The Violet sea snail inhabits the ocean surface by secreting a raft of mucus bubbles to keep it afloat. It spends its whole life drifting on the ocean surface in warm seas at the mercy of the winds. It is blind and has a paper-thin shell. It feeds on by-the-wind sailors and other colonial hydroids that drift through the oceans. This gastropod molluscs grows up to 4 cm.. It manages to float by producing its own mucus-covered bubble raft, and feeding on floating cnidarians such as Blue Bottles (Physalia physalis) and By-the-wind Sailors (Velella velella).

Violet snails are protandric hermaphrodites, meaning they are born male and develop into females over time. Fertilization is internal: males release sperm into a case that drifts to a female, where the sperm fertilizes the eggs.The Violet Snail broods its young and releases the miniature adults directly into the sea.The tiny purple snails are immediately able to build their own rafts. They use their foot to agitate the water, creating bubbles, which they bind together with mucus. If the bubble raft ever breaks apart, the snail will sink into the ocean and die.