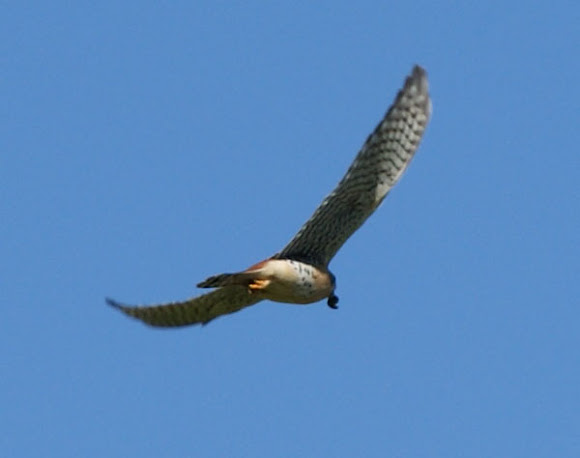 It's one of the most colorful of all raptors: the male’s slate-blue head and wings contrast elegantly with his rusty-red back and tail; the female has the same warm reddish on her wings, back, and tail. Hunting for insects and other small prey in open territory, kestrels perch on wires or poles, or hover facing into the wind, flapping and adjusting their long tails to stay in place.

American Kestrels favor open areas with short ground vegetation and sparse trees. You’ll find them in meadows, grasslands, deserts, parks, farm fields, cities, and suburbs. The southeastern U.S. form breeds in unusual longleaf pine sandhill habitat. When breeding, kestrels need access to at least a few trees or structures that provide appropriate nesting cavities. American Kestrels are attracted to many habitats modified by humans, including pastures and parkland, and are often found near areas of human activity including towns and cities.

Caught this little cutie right as he was grabbing some lunch - looked to be a slug or snail....he seemed to have like the insect because he did rouse afterward.

Great series Sharon! Welcome to PN! I'd love you to add this and your other raptor spottings to the mission Raptors of North America: http://www.projectnoah.org/missions/8627...