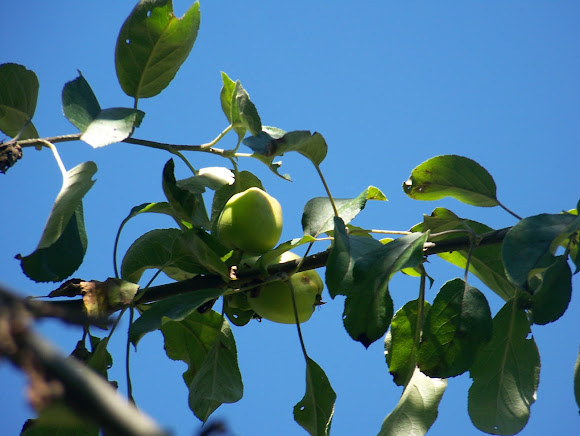 I took the first picture in July 2012, and the second picture of the same tree, in December 2012. I like how the apples held on throughout the winter. I harvested many of the apples in the fall, and still have some in my freezer. They're great for making pies and apple jelly.

" It is native to western North America from Alaska to California, where it grows in coniferous forests. "

"The fruit can be eaten raw or cooked, however it has an acidic flavor. The fruit can also be used to make pectin. The bark can be used as a herbal medicine. It is also grown in parks and gardens as an ornamental plant. Pacific crabapple fruits was prized by indigenous peoples of the Pacific Northwest, and were gathered all along the coast. The tree was also valued for its tough, resilient wood, used for making implements, and for its bark, used for a wide range of medicinal purposes."