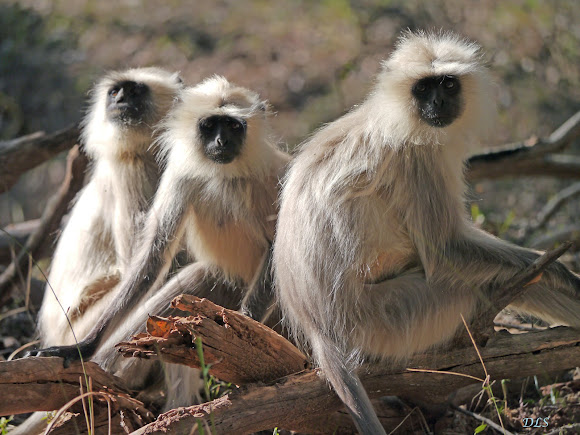 These langurs are largely grey, with a black face and ears. Externally, the various species mainly differ in the darkness of the hands and feet, There are also significant variations in the size depending on the sex, with the male always larger than the female.

Gray langurs are large and fairly terrestrial, inhabiting forest, open lightly wooded habitats, and urban areas on the Indian subcontinent. Most species are found at low to moderate altitudes

Female grey langurs do not make it obvious that they are in estrous. However, males are still somehow able to deduce the reproduction state of females. Females signal that they are ready to mate by shuddering the head, lowering the tail, and presenting their anogenital regions. Such solicitations do not always lead to copulation. When langurs mate, they are sometimes disrupted by other group members. Females have even been recorded mounting other females.

The gestation period of grey langur lasts around 200 days, at least at Jodhpur, India. In some areas, reproduction is year-around. Year-round reproduction appears to occur in populations that capitalize on human-made foods. Other populations have seasonal reproduction.

Infanticide is common among gray langurs. Most infanticidal langurs are males that have recently immigrated to a group and driven out the prior male. These males only kill infants that are not their own. Infanticide is more commonly reported in one-male groups, perhaps because one male monopolizing matings drives the evolution of this trait. In multiple-male groups, the costs for infanticidal males are likely to be high as the other males may protect the infants and they can't ensure that they'll sire young with other males around. Nevertheless, infanticide does occur in these groups, and is suggested that such practices serve to return a female to estrous and gain the opportunity to mate.

Females usually give birth to a single infant, although twins do occur. Most births occur during the night. Infants are born with thin, dark brown or black hair and pale skin. Infants spend their first week attach themselves to their mothers' chests and mostly just suckle or sleep. They do not move much in terms of locomotion for the first two week of their life. As they approach their sixth week of life, infants vocalize more. They use squeaks and shrieks to communicate stress. In the following months, the infants are capable of quadrupedal locomotion and can walk, run and jump by the second and third months. Alloparenting occurs among langurs, starting when the infants reach two years of age. The infant will be given to the other females of the group. However, if the mother dies, the infant usually follows. Langurs are weaned by 13 months.