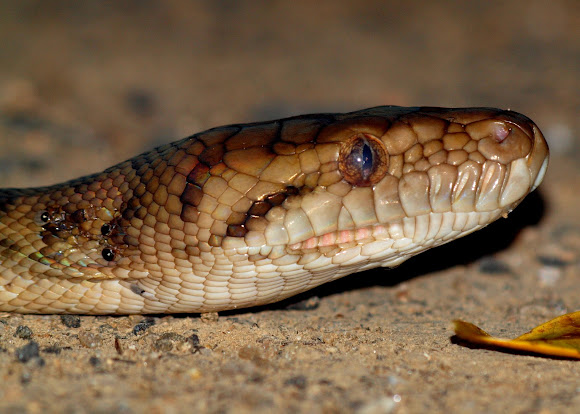 The amethystine or scrub python is Australia’s largest snake, growing to lengths of 8.5 metres, but more commonly 3.5-7.5 metres. Although long, it is quite slender with an elongated head. The snakes are light to dark brown and can have a dark brown to black zig-zag pattern that sometimes looks like bands. Their underbellies are white or cream coloured. The amethystine python is non-venomous, killing its prey by constriction after grabbing it in its jaws or with its body. The snakes have a prehensile tail (which means they can use their tail to grip things) and this helps them move through the trees. They often bask in the sun on tree branches.

Amethystine pythons range from north of Townsville in Queensland, to Papua New Guinea, Iran Jaya and Indonesia. They are found in open and closed forests from rainforest to woodland and open scrubland and prefer areas near water. They are good swimmers.

Diet: Small birds, reptiles, frogs and mammals. The python has been known to eat anything from fruit bats to tree kangaroos – the prey it can swallow can be much bigger than it! Reproduction: Mating occurs between June to September and 7-19 eggs are laid. These stick together in a clutch which the female then coils around, shivering her muscles to raise the temperature to keep the eggs warm. Incubation lasts 77-88 days and then the young break through their leathery eggs and after waiting for up to 48 hours, take off.

Hello. All of the Australian mainland Morelia amethistina are now considered Morelia kinghorni (a former subspecies).