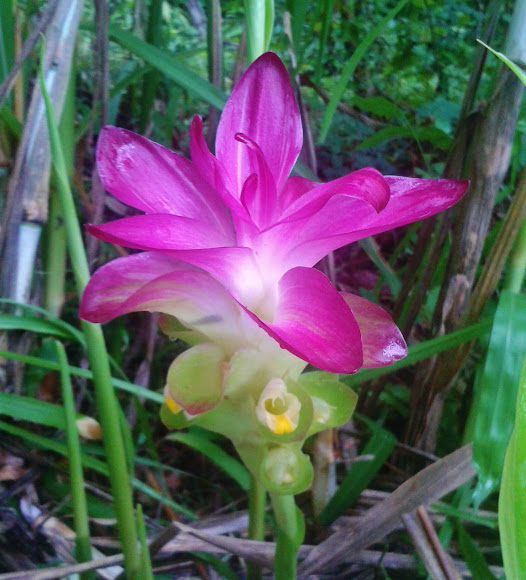 Native Turmeric, or Cape York Lily, is a rhizomatous herbaceous perennial plant of the Zingiberaceae or ginger family. It is grown for its flowers in Zimbabwe, and a cultivated variety called "Aussie Plume" is grown in the US which can grow up to 6 ft (almost 2 meters) tall.[3] The native form is usually less than 500 mm (20 in) tall, with long green leaves (140-450 x 60–190 mm), pleated. Flowers 15–20 mm, November to March in Queensland, normally yellow on a spike with pink, red, mauve or green bracts. Occasionally a white form is found in the wild. The Aboriginal Gugu Yimithirr language name is kumbigi. Aboriginal people in Cape York Peninsula used to roast and eat the roots of this plant. IUCN Red List status: not evaluated, but very common and widespread in Queensland.

C. australasica is the only Australian native of the 50 world-wide species of Curcuma. It occurs on Cape York Peninsula, a few areas in the Northern Territory, Australia, and in Papua New Guinea. It has a very beautiful, long-lasting flower found in moist pockets in sandstone areas and in wet woodland and forest areas. It grows well in containers, can be propagated by division and prefers to well-watered in summer and dry in winter.