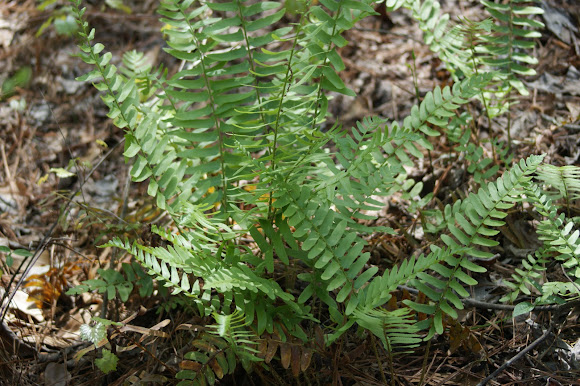 . Native to eastern North America from Nova Scotia west to Minnesota and south to Florida and eastern Texas. This one was photographed in a deciduous forest in east-central Georgia along the Bartram Trail in Columbia County, GA.

It is one of the most common ferns in eastern North America, being found in a wide variety of habitats and locations. The fronds are semi-erect until the first hard frost, after which they recline to be flat on the ground, effectively holding in place fallen leaves so that they become soil on the slope.

QWMom, I added a couple of fern pics to your mission.

Hi Ken! I have a fern mission going.. would you mind adding this and any other ferns you want it it? (Especially identified species!) Hoping to learn enough that identifying these will be much easier!

Thanks chesterbperry for the second look at this fern. Your ID suggestion looks spot on.

chesterbperry, I added two more close-up photos that show the pinnae. They appear to be finely toothed.

It is not ebony spleenwort, the rachis is always dark, hence the common name. Sorry, not sure will be able to identify. Are the pinnae toothed or entire?