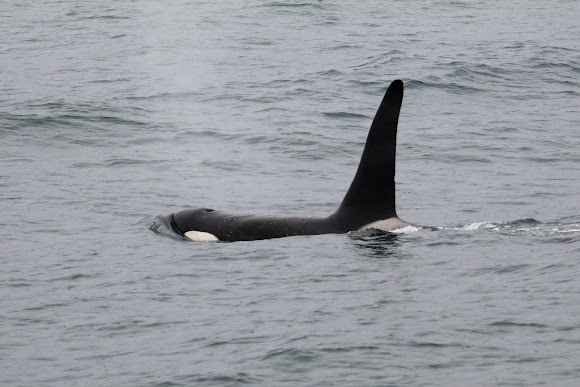 From the Alaska Department of Fish and Game: Adult male killer whales in the North Pacific may grow to a length of approximately 27 feet (8.2 m), whereas females grow to an average length of about 23 feet (7 m). Adult males may weigh almost twice as much as females, up to 13,300 pounds (6,000 kilograms). Killer whales are predominantly black in color with large white patches under the jaw and above and behind each eye. Much of the ventral surface of killer whales is also white and there are large white patches which extend from the ventral area onto the flanks. A gray or white saddle area is often found behind the dorsal fin. This area is highly variable and is one of the characteristics used to identify individual whales. The very tall dorsal fin is characteristic of this species. The dorsal fin may reach 6 feet in height in males but usually does not exceed 3 feet in height in females.

Oceans. These were found in Resurrection Bay, part of the Kenai Fjords National Park.

Our boat was in the process of rescuing a lost sonar drone and I'm proud to say that I was the first to see these tall dorsals cutting through the water nearby. I notified the captain of the vessel and he took us in for a closer look. This was a pod of close to twenty orcas, but the large male in the first picture was the most active and photogenic.