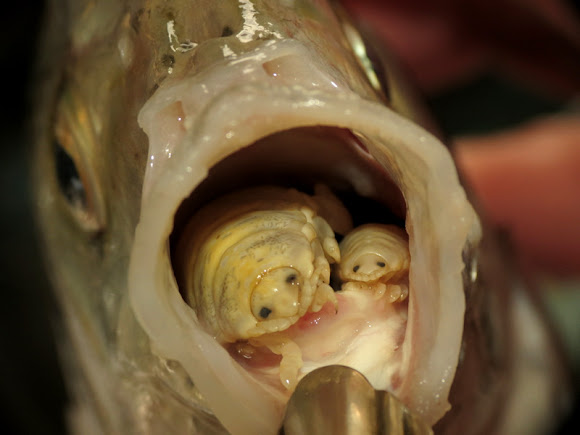 This parasite enters fish through the gills, and then attaches itself at the base of the fish's tongue. The female attaches to the tongue and the male attaches on the gill arches beneath and behind the female. It extracts blood through the claws on its front, causing the tongue to atrophy from lack of blood. The parasite then replaces the fish's tongue by attaching its own body to the muscles of the tongue stub. The fish is able to use the parasite just like a normal tongue. It appears that the parasite does not cause any other damage to the host fish. Once C. exigua replaces the tongue, some feed on the host's blood and many others feed on fish mucus. This is the only known case of a parasite functionally replacing a host organ. Quite a suprise when we started preparing the Silver trevally we caught for dinner.

Also noah is the board of most extraordinary cool public nature photos around!

Thanks Yasser - I'm happy that other people are learning something from my spotting!

This picture is amazing.. ty for sharing

Aaron, awesome work to make sure Rachael received the proper credit for this amazing encounter! I agree, this has got to be one of the most fascinating spottings we've ever seen. Thanks again for all the contributions Rachael and glad to hear people are using your image as a reference now :)

I've seen a Web article and a Facebook post recently that covers this species. The Facebook post actually stole Rachael's lead photo and didn't give credit. I quickly stepped in and let the page admin know the source. This remains one of my favorite PN spottings. :-)

That's one of the weirdest things I've ever seen. What incredible photos, Rachael. A great spotting, and belated congrats for your SOTD. Cheers :-)

They seem to say, "awh, you found us! Now your turn to hide!!" This species is quite widespread around the world, seem's like it's a fish's new fashion accessory. Awesome find and shot!

Very interesting Rachel, thanks for sharing.

That is so gross, and yet, fascinating and amazing at the same time.

Yes Ronald, we still had fish for dinner! Seems like most PN people are fascinated/interested/bit grossed out by this and everyone that has seen the PN facebook post has just plain freaked out!

I'm glad that the parasite doesn't cause damage to the host and surprised!

Magnificent finding! Did u guys manage to have the fish for dinner then?? i can't imagine having the appetite after seeing that... :)

Never heard of such a thing. Might have nightmares.

could we put a ruler next to these "horrors"? What a mind-blowing system of survival/existence!

Beautiful spotting! Congratulations on a very well-deserved Spotting of the Day!

Great series ans amazing capture RachaelB,congrats on the SOTD and thanks for sharing

Congratulation!! This spotting sure deserves SOTD, actually I would make it (if it was up to me!) SOTW. Thank you so much for sharing, help me see nature with more curiosity!

amazing creature. great spotting. mind blowing spotting of the day!!! Congrat Rachel...you definitely deserve it with this one!!!

and 88 other people favorited this spotting