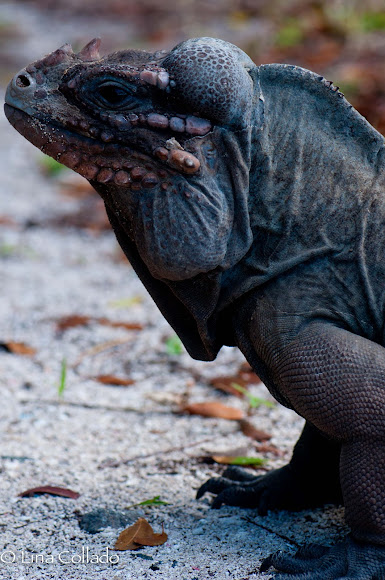 Literally, it's like walking into the dinosaur era whenever you encounter these iguana's or the 2 fists size hermit crabs. Most amazing island considered the Galapagos of the Caribbean. Wikipedia : "The Mona ground iguana is a large-bodied, heavy-headed lizard with strong legs and a vertically flattened tail which is capable of reaching 1.22 metres in length (from snout to tail). A crest of pointed, horned scales extends from the nape of the neck to the tip of the tail. The color is a uniform gray to olive drab with slight brown or blue colorations. Juveniles differ from adults in that they have gray transverse bands across their bodies.[8] These bands last until they are sexually mature at about three years of age."

The Mona Iguana found nowhere else in the world, is considered the most spectacular single form of life on the island. It attains four feet in length but is harmless. Their nests, consisting of a tunnel burrowed into the soil, are commonly on the coastal plain. Their food is vegetable matter.