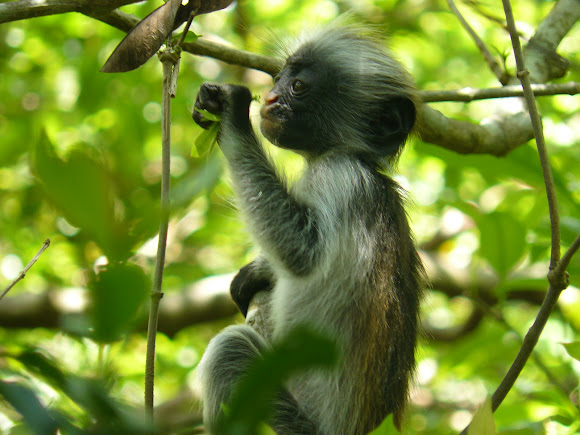 Jozani forest is famous for its Red Colobus monkey, the rare species. The Zanzibar Red Colobus Monkey has been isolated from its mainland counterparts for at least 10 to 15 thousand years, thus producing distinct sub-species with different calls, eating habits and coat patterns. Jozani forest has become the last stronghold in the world for this particular type of colobus.

Jozani Natural Forest, the smaller trees and shrubs make several sub-canopies under the highest canopy of trees here, with trails throughout.

This is a species of red colobus monkey endemic to Unguja, the main island of the Zanzibar Archipelago, off the coast of Tanzania. It is also known as Kirk's red colobus after Sir John Kirk, the British Resident of Zanzibar who first brought it to the attention of zoological science. It is now classified as an endangered species and in the mid-1990s was adopted as the flagship species for conservation in Zanzibar. The population is still decreasing, and conservationists are attempting to work with the local government to devise a proper, effective strategy to protect the population and habitat. Challenges include the species' habitat, which is limited to the archipelago. The species has been reclassified three times; it was previously in the genus Colobus, then in the genus Procolobus, and later in the genus Piliocolobus.

Congratulations on your awesome SOTW!!!

When do monkeys leave there mom

Thank you all, I was really lucky with this spotting as I was at the time new to wildlife photography. Helped by a good guide and a zoom lens!

Congratulations Mel! Great pictures and info! This is truly a special spotting!!

Congratulations on a well-deserved SOTW Mel. It must be amazing to see them in their natural habitat.

Congratulations, Mel. This is an awesome SOTW. Zanzibar is also an amazing place, although I haven't been there for over 30 years. Deforestation was obvious then, so I shudder to think what's happened in the mean time.

Congratulations Mel, your Zanzibar Red Colobus monkeys have been voted Spotting of the Week! I have provided some recent conservation information with the write-up:

"Endemic to the island of Unguja in the Zanzibar Archipelago, this Zanzibar red colobus (Piliocolobus kirkii) has been voted Spotting of the Week! This species of red colobus monkey is classified as Endangered by the IUCN, and is mainly threatened by deforestation. Until recently, no proper range-wide population census had been conducted for this monkey. A 2017 census conducted by scientists of the Wildlife Conservation Society (WCS) showed that while there were more than three times as many Zanzibar red colobus monkeys than previously estimated (over 5,800 individuals, most of them in protected areas), the survival rate for young animals was very low and the species was now extinct in 4 areas, with forest habitat still being cleared for agriculture and tourism projects and hunting common. Read more about the survey and local conservation efforts here: https://buff.ly/2H4a3PZ "

Very interesting primate spotting - thanks for pointing out that it is endangered and that efforts are being made to protect it.

Your spotting has been nominated for the Spotting of the Week. The winner will be chosen by the Project Noah Rangers based on a combination of factors including: uniqueness of the shot, status of the organism (for example, rare or endangered), quality of the information provided in the habitat and description sections. There is a subjective element, of course; the spotting with the highest number of Ranger votes is chosen. Congratulations on being nominated a second time this week Mel!

Adorable critters, great series and a top spotting. Thanks !

Your first picture is fantastic! Experiencing a moment with an endangered animal is not something easily forgotten...I can imagine you must have thoroughly enjoyed this. Wonderful series. Thank you for sharing Mel :)