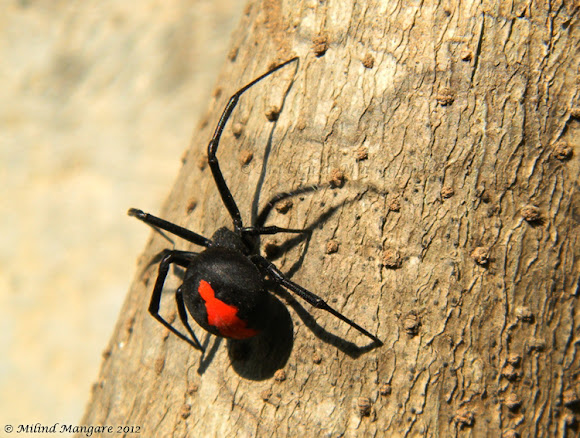 Female eats the male after mating hence got its name the "black widow", They have unusually large venom glands and its bite is particularly harmful to humans; however, Latrodectus bites rarely kill humans if proper medical treatment is provided.

My friend brought it to me. We both were equally curious about this beautiful black spider with red spot on its back and most important thing is that we were not aware about it being poisonous. So I kept it, photographed it and released in my home only, but never got to see it again.

thanks all..thanks martinl for the information

This is a female. Latrodectus is called the redback spider in Australia and has a very straight red line. In USA it is called a black widow and has an hourglass shaped red marking. They occur worldwide but the red marking pattern varies.

Amazing. I assume that is a black widow male, since the female has also a red mark but has the shape of an hourglass. Very great picture.

Thanks a lot ashish sir :)
will do it right now :)

This is very much interesting spotting Milind...
This specie is considered as same find in Australia.
http://en.wikipedia.org/wiki/Redback_spi...

The black widows have a lot of variations, so unfortunately I cannot help any further, sorry.

Thanks phillip torres for the Genus.
Any pick on exact species?