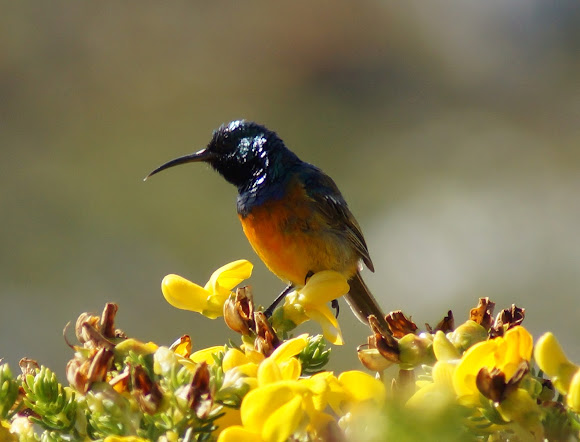 As with other sunbirds the bill is long and decurved, that of the male being longer than that of the female. The bill, legs and feet are black. The eye is dark brown. The head, throat and mantle of the male are bright metallic green. The rest of the upperparts are olive green. The upper breast is metallic violet and the lower breast is bright orange, fading to paler orange and yellow on the belly. The tail is long and blackish, with elongated central tail feathers, which extend some way, belong the other feathers. The female has olive-greenish grey upperparts and olive yellowish underparts, paler on the belly. The wings and tail is blackish. The juvenile resembles the female. The call is a twangy, weak ssharaynk or sskrang, often repeated several times.

Obviously due to its restricted range within fynbos this sunbird is associated with Ericas, from which it takes nectar, insects (often taken in flight) and spiders. It breeds when the heath flowers, typically in May. The male defends its territory aggressively, attacking and chasing intruders. This tame species is a common breeder across its limited range, and is an altitudinal migrant, moving to higher altitudes during the southern summer in search of flowers. It is gregarious when not breeding, forming flocks of up to 100 birds.

One of my all time favourites, cheeky and flighty little birds, camera shy :-)