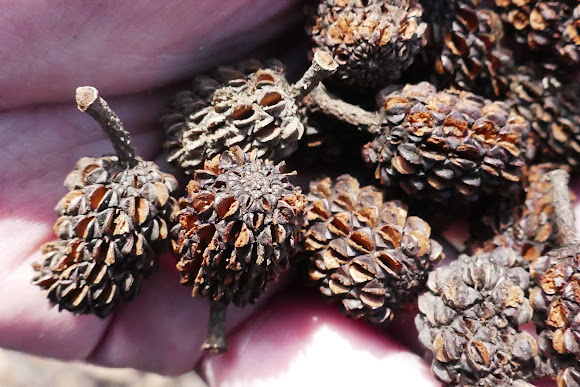 The genus Allocasuarina, commonly known as "she-oak", is endemic to Australia and a member of the family Casuarinaceae. The various species usually grow as a large shrub or tree, and are often described as having ‘pine needles’, but in actual fact have ‘cladodes’ with minute leaves arranged around each joint. They are usually found growing in sandy and other poor soils, and like peas and beans, are able to ‘fix’ nitrogen in the soil through nodes of symbiotic bacteria on their roots. This is critical for other species that depend on this natural fertiliser to grow in Australia’s poor soils.

There are seven species of she-oak that have been documented in Girraween, but two stand out as being the most likely ID candidates: Allocasuarina rupicola - "rock or shrubby she-oak", and Allocasuarina littoralis - "black she-oak". http://www.rymich.com/girraween/index.ph... From what I've seen so far, both species look very similar, particularly the fruit, so next trip I'll take a much closer look and try to secure a positive ID.

Thanks, Ava. I tend to scribbling things down on note pads so I don't forget and I'm sure my notes here get just as messy, but it sometimes flows and comes together. It's a work in progress. I also like to take broad area photo - it puts everything into perspective. Antonio does the same, and I love it :)

Neil, your close-up to wider environment photos are always so helpful, and your notes are great.