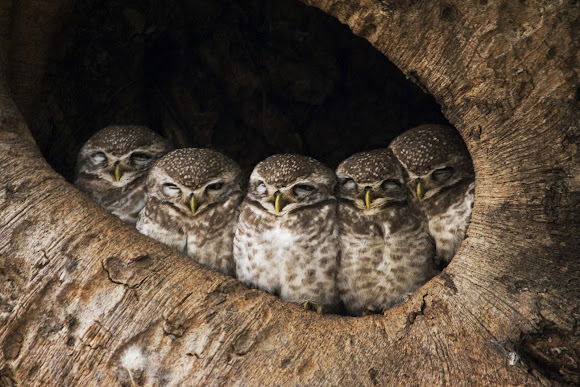 The Spotted Owlet is small (21 cm) and stocky. The upper parts are grey-brown, heavily spotted with white. The underparts are white, streaked with brown. The facial disc is pale and the iris is yellow. There is a white neckband and supercilium. Males & females are similar. The flight is deeply undulating. The nominate form is darker than the paler forms such as indica of drier regions. This species is nocturnal but is sometimes seen in the day. When disturbed from their daytime site, they bob their head and stare at intruders. It hunts a variety of insects and small vertebrates.

The Spotted Owlet breeds in tropical Asia from India to Southeast Asia. A common resident of open habitats including farmland and human habitation, it has adapted to living in cities. They roost in small groups in the hollows of trees or in cavities in rocks or buildings. It nests in a hole in a tree or building, laying 3-5 eggs.

These 5 owlets were spotted in a tree hole in Kanha National Park during evening safari. They are a family of 8 owls of which 5 were sitting in hole and two were on the outer branches. Indeed, they were the attraction of the day.

Thank you everyone for your wonderful comments. :)

@batex: You came up with an awesome poem. Cool. :D

As a woman, I feel my motherly instincts kicking in, and all I want to do is protect these babies!

Congrats, Mohit. This is a great spotting.

it has all the elements, cute and nice spotting!

These owlets are so cute! Great spot and beautiful photo Mohit!

Awesome!
U should put it on the mission: Birds of the World!

great shot Mitu.. :) i think the one which atul found sitting at the same hole was its mother or father. :)

You spotted incredibly delightful spotted owlets! This is SO MAJORLY CUTE! Thank you for sharing it! It must be a beautiful sight to keep in mind =).

and 76 other people favorited this spotting