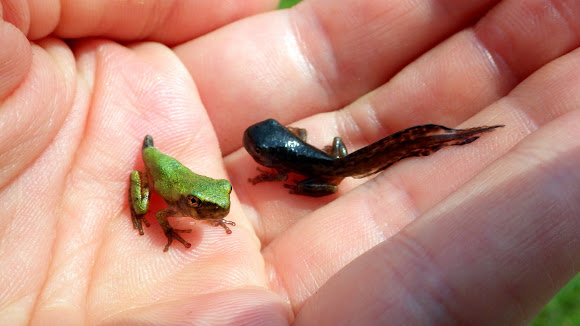 Several gray treefrog metamorphs of various stages of development were spotted in and around a wetland in central Maryland. Gray treefrogs are variable in color owing to their ability to camouflage themselves from gray to green, depending on the substrate where they are sitting.

Gray treefrogs are often found in small trees or shrubs located near or in bodies of water, and are very well camouflaged against the trunks of these trees. They are very rarely seen on the ground except during the breeding season.

Hyla versicolor is the sibling species of Hyla chrysoscelis (Cope's Gray Treefrog). These two species are indistinguishable based on external morphology and have overlapping ranges where these were spotted. Distinction can be made on the basis of the calls and chromosomal count. H. chrysoscelis is diploid (N=2), where as H. versicolor is tetraploid, (N=4).