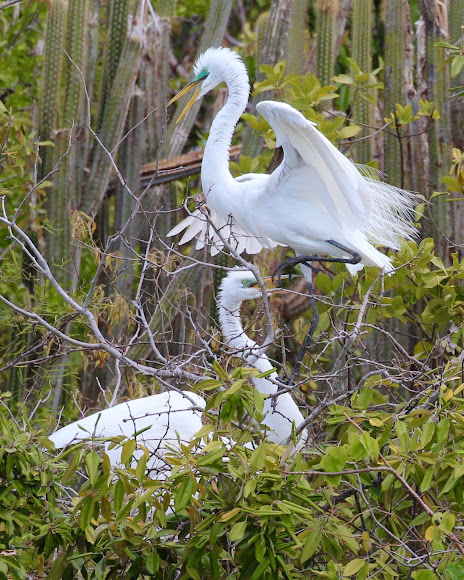 A Great White Egret couple in breeding plumage (neon green patch of skin on its face and long plumes grow from its back, called 'aigrettes') in their nest at Hawes Island rookery.

Hawes Island rookery, North Sound, Antigua. In general, Great White Egrets live in freshwater, brackish, and marine wetlands. During the breeding season they live in colonies in trees or shrubs with other waterbirds, ranging across the southeastern states and in scattered spots throughout the rest of the U.S. and southern Canada. The colonies are located on lakes, ponds, marshes, estuaries, impoundments, and islands. Great Egrets use similar habitats for migration stopover sites and wintering grounds. They hunt in marshes, swamps, streams, rivers, ponds, lakes, impoundments, lagoons, tidal flats, canals, ditches, fish-rearing ponds, flooded farm fields, and sometimes upland habitats.

Courtship during breeding season includes calling, circular display flight, stretching neck up with bill pointed skyward. The male builds a nest platform from long sticks and twigs before pairing up with a female, and then both members of the pair may collaborate to complete the nest, though the male sometimes finishes it himself. The nest is up to 3 feet across and 1 foot deep. It is lined with pliable plant material that dries to form a cup structure. They don’t typically reuse nests from year to year. They nest in trees, near water and gather in groups called colonies, which may include other heron or egret species, like at Hawes Island where there are Little Blue Herons and Tricolored Herons nests. They are monogamous, and both parents incubate their three to four pale blue-green eggs. Incubation is by both sexes, 23-26 days. Both parents feed young, by regurgitation. Young may clamber out of nest at 3 weeks, able to fly at 6-7 weeks.Young egrets are aggressive towards one another in the nest, and stronger siblings often kill their weaker kin so that not all survive to fledge in two to three weeks.