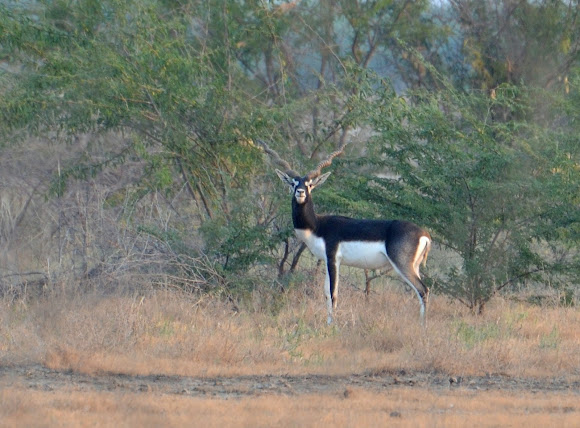 This particular blackbuck was found running with a herd of females, and being the only black one, stole my attention. A species native to the Indian Subcontinent it has been classified as near threatened by IUCN since 2003, as the blackbuck range has decreased sharply during the 20th century.The blackbuck is the only living species of the genus Antilope A fine male antelope of the Indian plains has long spiral horns. The older animal becomes deep black on the upper parts, in strong contrast with its white throat, belly and legs. He was spotted in the Little Rann of Kutch Wild Ass Sanctuary in Kutch District of Gujarat, India.

thank you so much. the error in location has been rectified. it was spotted in the Little Rann of Kutch in Gujarat, India.

great spotting, i found that Blackbuck was classified as near threatened..
i think you have placed Colorado, USA in the map by a mistake. so please correct it :)

Great capture Chiti! That's a beautiful antelope!! Was this found at the zoo? You have a location of Colorado but they are from the Indian subcontinent. If it is captive, please give a brief description and you may want to put it into the Captive Animal mission: http://www.projectnoah.org/missions/7973...
If it is not captive and is in India, please update your map/location. Thank you!