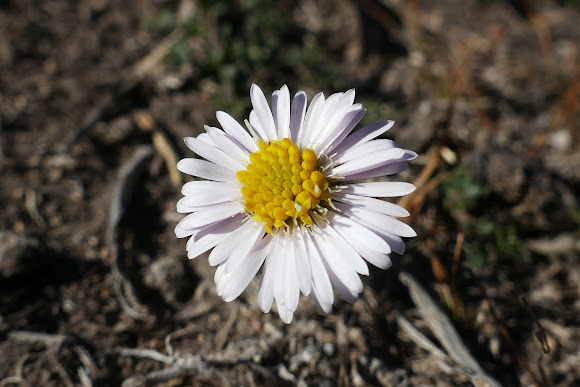 My 800th PN spotting is this modest, tiny little daisy, found all alone in the middle of a clearing on a sheep farm. I walked for many kilometres around this property, and after finding this single specimen I started looking for more, but no more were to be found so I doubled back later in the day to take its photo. I'm confident this is a species of Lagenophora, a genus of herbs in the daisy family Asteraceae. Lagenophora stipitata occurs naturally in this area. It has a typical small "daisy" flower, and this specimen was roughly the size of a 5 cent coin. Colours range from white, pink, purple to blue. There's a rough vehicle track in use plus hundreds of sheep and cattle that trample through here, not to mention an army of roos that know a tasty morsel when they see one, but this daisy has managed to survive them all. It is also surviving a severe drought, so it's a tough little plant that deserves pride of place at #800.

New England District of the Northern Tablelands, NSW. Rural landscape (sheep and cattle farm), but large areas of natural bushland vegetation in the area. Fully-exposed in a clearing with sandy soils. Drought conditions still persist. There's not much moisture around except for heavy frosts, but It seems to be coping.

There are several naturally-occurring Asteraceae in this region, and other ID possibilities for this spotting include: Stuart's daisy (Brachyscome stuartii), white burr daisy (Calotis dentex), and slender bottle-daisy or slender Lagenophora (Lagenophora gracilis) which varies in colour from white through to purple.

Regardless of size, daisies are beautiful. Plenty of natives too, so faves of mine also.

Poor mans flowers for a bouquet. Favourites of mine.

Thanks, Brian. It took me a while to realise how special it was, but I went back once it all clicked. They are most likely in plague proportions during spring and summer, but maybe the roos and sheep thin the numbers.

Congratulations Neil on your 800th!! Beautiful daisy! A true survivor that has defied the odds - excellent find Neil!