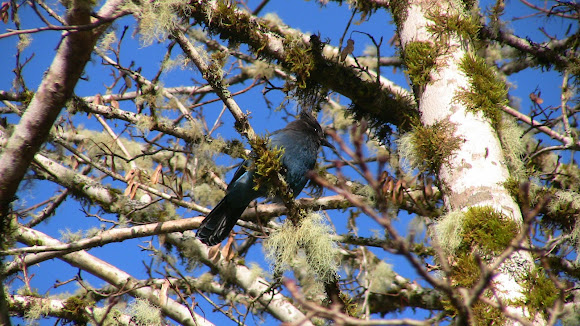 "The Steller's Jay (Cyanocitta stelleri) is a jay native to western North America, closely related to the Blue Jay found in the rest of the continent, but with a black head and upper body. It is also known as the Long-crested Jay, Mountain Jay, and Pine Jay. It is the only crested jay west of the Rocky Mountains."

"It occurs in coniferous forest over much of the western half of North America from Alaska in the north to northern Nicaragua completely replacing the Blue Jay in most of those areas. Some hybridization with the Blue Jay in Colorado has been reported. The Steller's Jay lives in coniferous and mixed woodland, but not in completely dense forest, and requires open space. It typically lives in flocks of greater than 10 individuals. In autumn, flocks often visit oak woods when acorns are ripe."

I followed this jay around the yard from tree to tree. I think he was just as curious about me as I was about him. He'd keep a safe distance from me, but stayed close enough for us to see each other.