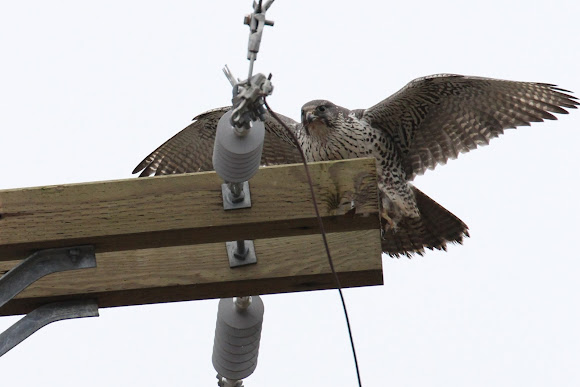 Large bulky falcon with barrel-shaped chest. This bird is leaning towards a dark grey morph; broader wings than most falcons and a tail that extends out past the tips of the wings when perched. Yellow cere, legs and ring around its eye. Dark tip on beak, facial markings varying from none on white morph to all dark cheeks on dark morph.

Breeds in the Arctic on the tundra near rocky outcrops and cliffs. Winters irregularly south down into the northern US. This year, several have been seen in the Fraser Valley where I live. This one was hunting on the PItt Polder which is a diked area that really resembles the tundra! They mainly feed on birds.

I have included Photos # 3 & 4 to show the barrel-chest on the perched bird and the broad wings on the bird in flight. I have seen Gryfalcons twice before, but this was my first really good look at one! It was pretty exciting!

Thanks, it was one of the birding highlights of my year!

Thanks Brenda and Ashley! I keep looking at the photos of this bird and remembering how special it felt to have so much time with this bird. A Gift!!
I have a dozen or more pics of him....