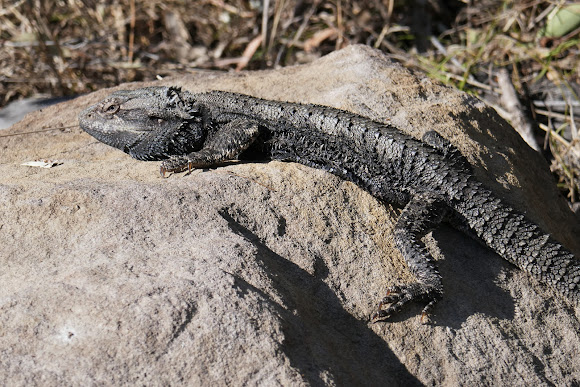 Happily sunning itself on a rock, this adult Eastern Bearded Dragon crouched and flattened as I approached. Prior to that, its head was raised high and it was standing tall, and that was the only reason I spotted it. Had it felt threatened at any stage, it would have puffed up and the spines around it's neck and abdomen would have been displayed. Fully grown, I'd say this specimen would have been at least 60 cms (2 ft) long from nose to tail, and most likely a male; females are slightly smaller. Being wild, its colour was typically charcoal grey, although some individuals can be a much lighter shade of grey, but also tan and brown. I didn't want to get too close and risk frightening it off. This species is diurnal and semi-arboreal, and can usually be spotted in exposed places such as tree trunks and branches, rocks and logs, and retreating to lower and cooler places when too hot. They feed on a variety of small animals, including mice, smaller reptiles, insects, and various types of flowers.

Spotted at Logan's Inlet at Lake Wivenhoe, a large freshwater lake situated to the west of Brisbane. Dense native bushland. Currently drought conditions, but this species adapts well to that.

Indeed. They're pretty good at that. I recently tried to rescue one of it's road hog cousins, but it didn't fair so well. Rocks are much safer.