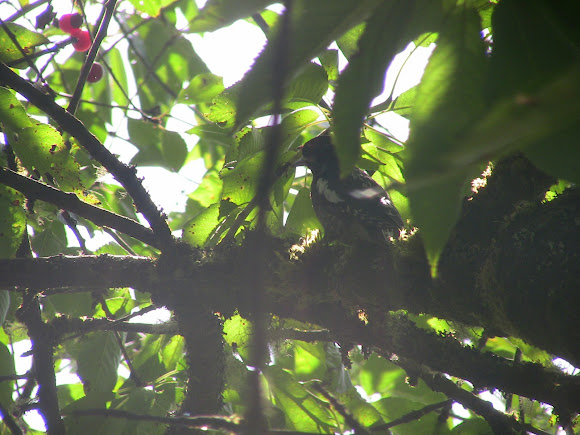 This bird was hard to see with the sunlight shining directly in my eye. However, he does appear to be a juvenile Red-breasted Sapsucker. Juvenile sapsuckers don't always have a lot of red, which might be why it appears there's little red on this bird. "Red-breasted Sapsuckers are similar in appearance to the closely related Red-naped Sapsuckers, but they have red heads and breasts. Their upperparts are black barred with white, and they have a prominent white stripe across each black wing. They lack the black breast-band of the other two sapsucker species found in Washington, and they have yellowish bellies. Males and females look much alike. Juveniles are mottled brown but have white wing-stripes like the adults" (birdweb.org).

This bird was hanging out in my cherry tree. "The dense mixed and conifer forests typical of western Washington are the preferred breeding habitat of Red-breasted Sapsuckers. They are often found in mature and old-growth forests, but will breed in second growth as long as there are some large nesting trees. They can also be found in riparian habitats with large cottonwoods" (birdweb.org).

I have noticed yellow bellies on birds flying above me. Also, the picture of a juvenile red-breasted sapsucker on the birdweb.org looks just like the bird I saw. "Sapsuckers get their name from their foraging strategy, which consists of drilling neat horizontal rows of holes into tree trunks and then returning to those holes later to feed on the running sap and the insects attracted to it. Unlike most woodpeckers, they forage in healthy trees and can actually kill a tree if they drill too many sap-holes around its trunk, although this is quite uncommon" (birdweb.org) One of my apple trees is full of holes from these sapsuckers. It's struggled to live all these years, falling over on its side during the winter. However, this summer, it's still alive, producing a lot of fruit. The apples are easy to reach, because it's growing sideways.