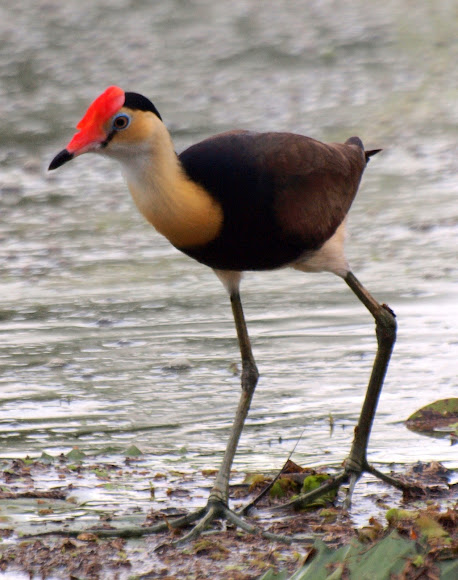 The Comb-crested Jacana, also known as the Lotusbird, has a red fleshy forehead comb, a black crown, back and breast and brown wings. The belly, face and throat are white, and there is a faint yellow tinge around the eye and throat. Both sexes are similar in appearance, but the female is larger than the male, and slightly brighter in colour. In flight, the long legs and toes trail behind the body. Young Jacanas resemble the adult birds, but are rufous to black on the head and nape, and have a rufous-black breast band. The red fleshy comb is much smaller and darker.

Feeding: The Comb-crested Jacana feeds on aquatic insects, which it seizes from floating vegetation or the surface of the water. It also feeds on seeds and aquatic plants. Birds rarely come to shore. When searching for food, the Comb-crested Jacana bobs its head and flicks its tailed continuously. Breeding: The female Comb-crested Jacana may mate with several males, while the male alone builds the nest, incubates the eggs and cares for the young. If danger threatens the young birds, the male has the curious habit of picking the chicks up under his wings and carrying them off to safety.

Wow! This is gorgeous. Have to say I love it more than the Jacanas we find in CA and SA!