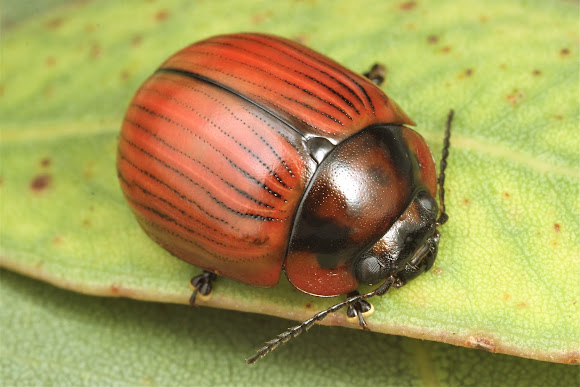 A variable beetle found commonly on the outhern states of Australia. It can be black, striped, spotted or brown, depending probably on surrounding beetles which it mimics. It is nocturnal and found under bark in the daytime. This brown one is likely to mimic Paropsisterna morio, which, being black across all its range, is sometimes brown south of Adelaide, and Kangaroo Island and King Island (Tasmania).

Thanks Tukup
Thanks Mr. António It is important for some of us to specialize.

Thankyou Daniele. I found two females a couple of years ago so couldn't identify them, beyond guessing. Finally returning to Adelaide to view the excellent type material in the museum, I happened upon another brown form which, fortunately is male and was able to confirm identity. He no longer looks quite so dapper.

What a great shot Martin. Incredible detail. You can see every dot. Nice spotting and congratulations on the SOTD.

Beautiful one Martin,you have a amazing collection of beetles,great work,congrats on the well deserved SOTD and thanks for sharing

Congratulations Martin, this neat leaf beetle is our Spotting of the Day! Glad you''re sharing these again here :-)

"It looks as if made of polished mahogany! Paropsisterna nigerrima is our Spotting of the Day. Paropsisterna is a genus of leaf beetles (family Chrysomelidae) indigenous to Papua New Guinea and Australia. Many have brilliant aposematic colours and feed on eucalyptus leaves. This species is nocturnal, and can be found under loose bark of Eucalyptus during the daytime. It comes in entirely black, brown or striped varieties.
For a spotting of a different variety of the same beetle: https://buff.ly/2VvVRF2
Martin maintains his own site dedicated to the documentation of Paropsisterna species in Australia. Check it out: https://buff.ly/2o2q1BC "

Thanks Neil. I found two females a couple of years ago which had me quite confused. During a recent trip to Adelaide I finally found some males and after dissection its identification is sure. Black pronotum and black stripes are certainly unique to Adelaide environs.