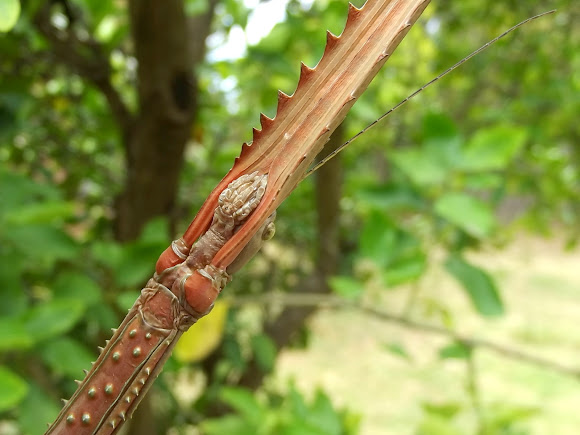 A very large brown stick insect Although it has large carefully folded wings she cannot fly. Measuring 30 cm this is the second largest species in Australia.

This specimen is captive bred. They are native to Northern Queensland.

Known as the titan stick insect, wuelfingi's stick insect or the giant brown stick insect, there are six to eight Acrophylla species in Australia. This one featured here is Acrophylla wuelfingi and very similar to A. titan found further south. The ways to differentiate adult species is by the white blaze on the forewing shown in pic #3. and the short cerci. This does not occur in A. titan. http://en.wikipedia.org/wiki/List_of_Pha...

Thank you Leuba. I'll show you the male next.

I love the first shot - what an amazing insect !

Thanks Sergio and Gerardo and Leanne.
Sergio, that would be Greek mythology all over again; they would hardly clash since they are both vegetarian. Fortunately mantids don't get this large!

We could put your insect together with mine and shoot a movie, "Clash of the Titan bugs"!

Thanks Yuko and Chun and Lauren.
@ Chun, notice in my next spotting how well the head tucks into the outstretched forelegs. Evolution is certainly a wonderful fine tuner.
http://www.projectnoah.org/spottings/173...

Evolution is wonderful.
I didn't notice that there are space between their forelegs for it's mouthparts.