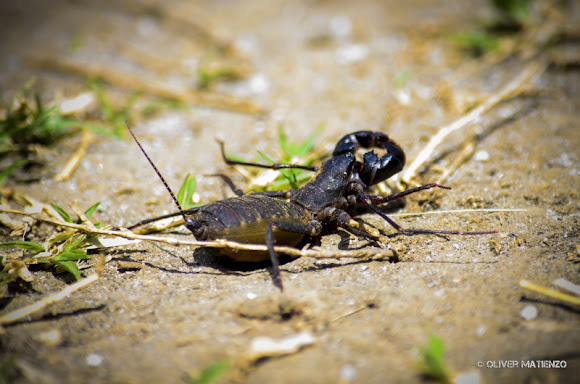 Thelyphonida is an arachnid order comprising invertebrates commonly known as vinegaroons (also spelled vinegarroons and vinegarones). They are often called uropygids in the scientific community after the former order Uropygi (which originally also included the order Schizomida). They are also known as whip scorpions because of their resemblance to true scorpions and because of their whiplike tail.

Vinegaroons are found in tropical and subtropical areas excluding Europe and Australia. Also, only a single species is known from Africa: Etienneus africanus, probably a Gondwana relict endemic to Senegal, the Gambia and Guinea-Bissau.[4] They usually dig underground burrows with their pedipalps, to which they transport their prey.[2] They may also burrow under logs, rotting wood, rocks, and other natural debris. They prefer humid, dark places and avoid light

Lucky to spot this.