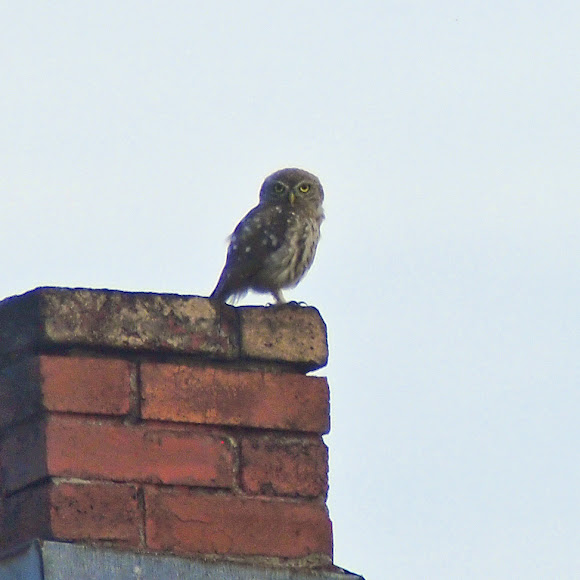 The little owl is a small owl with a flat-topped head, a plump, compact body and a short tail. The facial disc is flattened above the eyes giving the bird a frowning expression. The plumage is greyish-brown, spotted, streaked and barred with white. The underparts are pale and streaked with darker colour.[2] It is usually 22 centimetres (8.7 in) in length with a wingspan of 56 centimetres (22 in) for both sexes, and weighs about 180 grams (6.3 oz).[3] The adult little owl of the most widespread form, the nominate A. n. noctua, is white-speckled brown above, and brown-streaked white below. It has a large head, long legs, and yellow eyes, and its white “eyebrows” give it a stern expression. Juveniles are duller, and lack the adult's white crown spots. This species has a bounding flight like a woodpecker but the rounded wingtips and general appearance of the birds are quite different.[2] Moult begins in July and continues to November, with male starting before female. The call is a querulous kiew, kiew. Less frequently, various whistling or trilling calls are uttered. In the breeding season, other more modulated calls are made, and a pair may call in duet. Various yelping, chattering or barking sounds are made in the vicinity of the nest

I heard the specific ”kiew kiew” sounds while in the yard, after which I started looking around the trees and buildings nearby. And there it was, it stood on top of a chimney for about 10 minutes, then left.