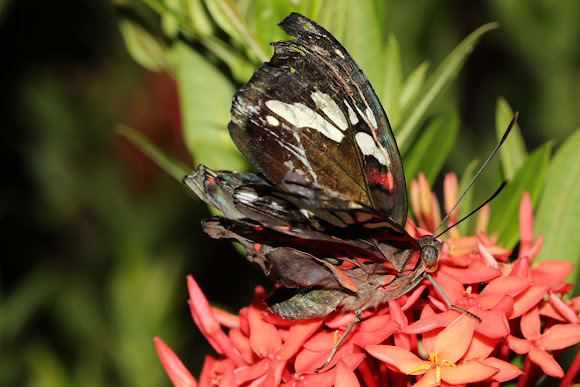 Nymphalidae; Nymphalinae; Limenitidini; Euthalia lubentina goertzi Jumalon, 1975. "Formerly the Nymphalidae subfamily Limenitidinae, which includes the admirals and relatives. The common names of many species and genera reference military ranks or titles of nobility (namely those from former tribe Adoliadini, e.g., count, duke, earl, and marquis), in reference to these butterflies' large size, bold patterns, and dashing flight. In particular, the light stripe running lengthwise across the wings of many Limenitidini has reminded earlier authors of officers' (e.g. admiral, commander, commodore) shoulder marks and epaulets." Philippine Lepidoptera.

I spotted this Limenitidini on Dwarf Santan (Ixora coccinea) in our front yard. As the pictures show, it was in a tattered condition with its wings deformed and shredded. My first thought was that it had survived an attack by a predator, but after a moment's reflection, I discarded that idea. When I looked a little more closely, I could see that the antennae, legs and entire body were undamaged. The obvious damage to the forewings was that some sections were broken off, but more significantly, the hindwing outer margins were curled. This was the result of a difficult eclosure from the pupa. The deformed hindwings hampered flight and it probably crashed several times and damaged itself.

I know that it is upsetting to see a living creature in this poor condition and I imagine that there might be some criticism out there. This would be entirely understandable. However, I decided to publish this on Project Noah simply to illustrate that this species is present in my local area and this information might be significant, for example to the Butterfly Missions or just an avid butterfly enthusiast who likes to keep tabs on things.

John B. 3 months ago

Hi Rithmini, thank you for your comment. John B.

Informative notes
thank you for sharing!